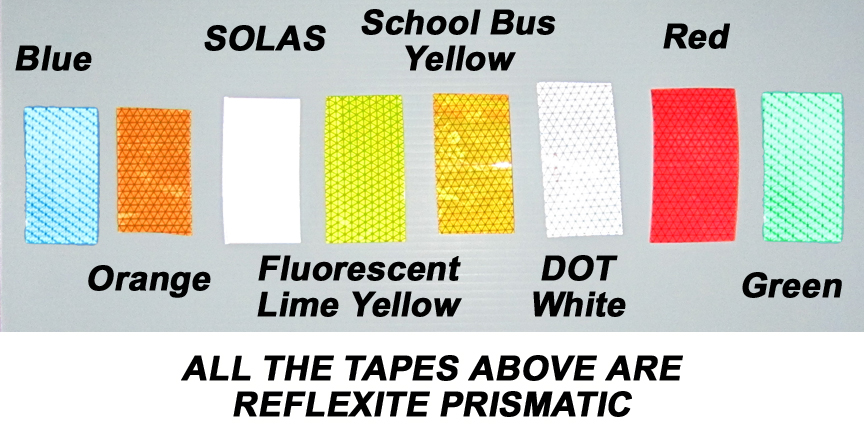 Each year, as the weather turns colder, people in Northern States and Canada begin to gear up for snowy conditions.  Snow plow companies begin making snow poles to mark roads and driveways and snow mobile enthusiasts begin to prepare their trails and snowmobiles.  There are also a variety of other types of vehicles and objects that need to be seen at night and in the daytime in snowy conditions.  (i.e. dumpsters, roll off containers, fire hydrants, utility boxes, gates, fences, etc..)

Creating visibility in the snow is always a matter of CONTRAST.  The words in this article are only visible because they are black and the background is off white.  In northern states contrast in the summer time is going to be different than contrast in the snow for obvious reasons.  Also, you have to consider visibility in the daytime and at night.  You can see how this can be a bit of a challenge.

To keep this article simple I am going to list the different colors of prismatic tape along with their pros and cons for snow visibility.  Prismatic tapes are the brightest class of tape and are excellent for snow conditions.  I have a picture of the different tapes above.

White -This is the brightest tape by far.  White prismatic reflects any where from 500 for DOT white to  1000 candelas for SOLAS.  Against a dark background this is great but against a white background visibility drops.  In the daytime white is not very noticeable.

Fluorescent Lime Yellow – This tape is visible day and night.  It is also very bright although not as bright as white.  Roughly 325 candelas which is excellent.  It can be seen against almost any background.  The advantage to this film over white is that it reflects a color which is important when white is your background.

Orange – This film reflects at 185 candelas.  This is actually very good for an orange tape.  Orange against other colors really stands out.  It normally designates a work zone so it is a good color for snow poles.  The darker shade stands out against white quite well.

Red – This film reflects at 75 candelas.  Don’t let the low number fool you.  Keep in mind you are sending out 75 candelas of a red color which really gets peoples attention and stands out against snow very well.  It is also very visible in the daytime.  Good film for snow poles.

Green – This reflects at the same rate as red.  Good color to mark areas that are ok to go into.  Green is a universal “GO” color.  Stands out well.  Use it where green is needed.

Blue –  This tape reflects at 35 candelas.  For blue that is very good.  Goes well mixed with other colors.  Good against light colored backgrounds.  35 candelas is plenty of light to see the film from several hundred feet away.

Keep in mind that you can mix colors to create any effect you wish.  You could do two stripes of red with white in between to get a good contrast.  You can use green to mark areas that are ok to enter and red to mark do not enter zones.  Blue is commonly used for fire hydrants.  Yellow is a work zone color and signifies caution.   As I stated before, I recommend the prismatic tapes over other types of reflective tapes because of the higher reflectivity.

If you are just doing snow poles, and if they are thin, you may want to consider our Flexible High Intensity” reflective tape.  It is stretchable, flexible and will wrap around even the tightest radiuses.  Available in white, orange and yellow.